13 candidates participated in the Voter Guide by submitting answers to a questionnaire which included questions about whether they would prioritize expanding library hours, their thoughts on the digital divide, and the importance of public spaces in Long Beach.

Celebrating the History of the Friends

To further the principle that a well informed populace and freedom to read are essential to the well being of our community and secondly to focus public attentions on the library’s needs, services and facilities. 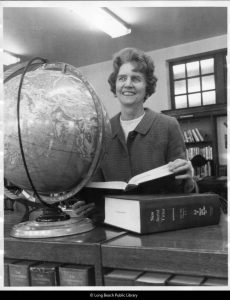 This is the official purpose outlined by the founding members of the Friends of the Long Beach Public Library in 1963 when they established themselves as a group. 55 years later, the Friends still has a strong membership and makes a difference in the lives of hundreds of thousands of library patrons every year through their volunteerism, advocacy, and fundraising.

Libraries are our centers for equal access to education and community building resources, but sometimes these much-needed services are challenged. In 1962, The Last Temptation of Christ by Nikos Kazantzakis was challenged at the Long Beach Public Library. Those asking for its removal accused the Library of promoting communism by carrying the book in the collection. The Director of Library Services at the time, Blanche Collins, spoke before the City Council of the importance of not censoring the Library’s collection. Literacy supporters joined her at this meeting and, with the support of Mayor Edwin W. Wade, the book was not removed from shelves. 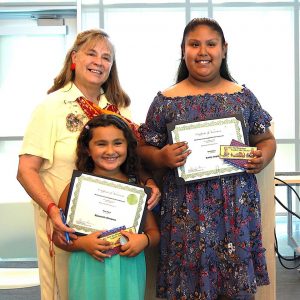 Unfortunately, the challenges continued and it wasn’t long before an organization in Long Beach requested a ban of The American Way of Death by Jessica Mitford, books by Langston Hughes, works by Pete Seeger, and records recommended by UNESCO. Again the complaint of these works was that the literature promoted communist ideals.

Blanche Collins once again spoke before the City Council with many supporters in attendance. At this meeting, Collins said that facilities of the library are welcome to all patrons. She spoke of the importance of allowing works documenting extreme ideas on both ends of the spectrum to provide the access to information and learning.

Collins received calls and piles of mail in support. Thanks to this and the many supporters who accompanied Collins to the City Council meeting, the works were not censored.

These library supporters mobilized and on December 8, 1963, the Friends of the Long Beach Public Library held their first formal meeting. Among the founding members, was Renee Simon who would go on to become one of the first women to be elected to the Long Beach City Council.

In 1996, several members of the Friends Board, including Margaret Durnin, formed the Long Beach Public Library Foundation as a separate organization originally shepherded by the Friends.

Today, the Friends of the Long Beach Public Library continues to be one of the most prominent volunteer groups in Long Beach. Patricia Benoit, who joined the Friends in 1999, serves as President and leads the Friends through the annual essay contest for youth, Egyud Memorial Scholarship award, and annual membership luncheon.

Learn more about the Friends of the Long Beach Public Library at lbpl.org/support/friends. 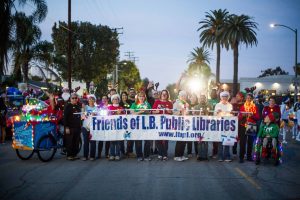 The Friends of the Long Beach Public Library and librarians at the 2017 holiday parade.

This is a very important election which will determine our new Mayor and City Council members in Districts 1 and 5. The newly elected Mayor and City Council positions will help set the direction and determine future budgets for all City departments, including Library Services. This guide focuses specifically on the candidates’ positions regarding the Long Beach Public Library.

To prepare the guide, a group of library supporters prioritized the five most important questions we wanted the candidates to answer. We sent a letter to the six run‐off candidates inviting them to submit answers to the questions we provided. All six candidates responded by the deadline and we have included their unedited responses.

Please note that the Long Beach Public Library Foundation and the Friends of the Long Beach Public Library are 501(c)(3) organizations. By law, we are nonpartisan and cannot endorse or campaign for candidates. We have presented the answers exactly as we received them, without edits and we are distributing this updated guide to our stakeholders as an educational piece without commentary.

We invite you to read the answers submitted by all the candidates who participated and we encourage you to make sure you are registered to vote and participate in this important civic process.

To prepare the guide, we sent a letter to all candidates who had registered with the City Clerk’s office by January 1, 2014, including 10 mayoral candidates and 19 city council candidates running for seats in the odd-numbered Council Districts (1,3,5,7,9). The letter invited candidates to submit a brief statement outlining their views about the library system and, if elected, their plans for its future. Twelve candidates responded with position statements by the deadline and we have included their statements. For those that did not respond by the deadline, we have included email and website information as submitted to the City Clerk (if available) and encourage you to do additional research to find out their positions on the Long Beach Public Library.

We invite you to read the complete comments from all the candidates who participated and we encourage you to make sure you are registered to vote and participate in this important civic process.