Supporting Education to Transform a Community

Over 5,000 people attended the Michelle Obama Neighborhood Library grand opening ceremony on September 10, 2016. It was an exciting day for the community of North Long Beach which went from having a small neighborhood library to having the largest library branch in the city with more resources and newer technology than any other Long Beach library branch.

This was an especially proud day for Rick Alsagoff who co-chaired the Library Foundation’s fundraising campaign which raised over $1 million for programs at the Michelle Obama Neighborhood Library. Together with his co-chair, friend and neighbor, Mary Hancock-Hinds, Rick raised awareness and funds for the new library and helped rally community support for this much-needed resource.

It was Mary who first invited Rick to join the Library Foundation Board of Directors in 2009. Rick first became involved by donating books to the Library. Learning about the Family Learning Center program was what ultimately inspired him to join the Board. The Library Foundation funds staffing and resources for the Family Learning Center program. The program serves children, job seekers, older people, and families with one-on-one support for homework, research projects and computer use.

“I feel education is a way out of poverty and a way to change your whole life,” said Rick while discussing what inspired him to join the Library Foundation’s Board of Directors.

Rick was born in Singapore and graduated from the National University of Singapore with a degree in Business Administration. Rick spent his early years in merchant banking in Singapore, and lived in Taipei, Tokyo, Hong Kong and Jakarta. He began travelling to Long Beach in the 1970s because his nephews and mother lived here. While it was not his original plan to become an American citizen, he finally moved to Long Beach in 1990 to take care of his mother.

Getting a Long Beach Public Library card was one of his first acts when he moved here. He had one of the older yellow library cards before the system was digitized.

Rick considers fundraising the life blood of the Library Foundation and is proud to have made a difference and supported programs that have helped transform the Long Beach community. 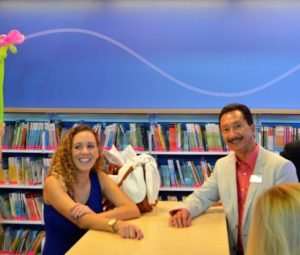