Advocating for Literacy and Libraries 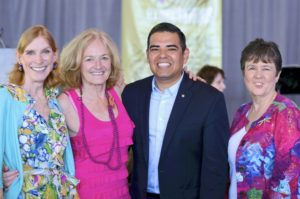 Margaret Farwell Smith inherited her love of reading from her mother. As a physician, her mother led a busy life, but she enjoyed reading under the shade of a tree in her spare time. Growing up, Margaret loved books in school and college, but it wasn’t until she retired from her career in healthcare that she became a strong advocate for literacy and libraries.

It was a perfect fit. Margaret was elected Board President for 2012 and started to flesh out the advocacy function of the Library Foundation. Although her career was in healthcare administration, she could see there was a need to organize and advocate for the Library to prevent further budget cuts and less access to library services.

Proper advocacy requires strategy and guidelines. It’s important for the Library Foundation’s Board of Directors and staff to stick to a singular message that resonates with city officials and the public. The Library Foundation’s main advocacy message emphasizes the value of the library system to the City. The educational and technological resources provided are available to all residents with a library card. For many residents who cannot afford services like preschool or a home internet connection, the Library’s resources are crucial and provide paths out of poverty.

Much of Margaret’s work as a Board member has focused on the new Civic Center. When the City was planning the new development, an idea was proposed to eliminate Main Library from the new Civic Center. Margaret and the Board rallied the community’s support and attended several City Council meetings to advocate against this. Their efforts were successful and a beautifully designed and modern new Main Library will open in 2019.

Margaret was elected as the Library Foundation’s first Vice President of Public Affairs for 2014 and has led advocacy and public relations projects ever since.

One of Margaret’s favorite memories from her time on the Library Foundation Board was getting to sign the first steel beam of the new Main Library at a special ceremony on September 19, 2017. She knew then that had it not been for vocal supporters of libraries, this moment would not have happened.

Margaret’s focus as a Board member has also been on philanthropy. As a member of the Board of Trustees for the Earl B. and Loraine H. Miller Foundation, she has helped maintain a partnership between the Library Foundation and the Miller Foundation to host the city’s annual Dictionary Days program. Since the program’s inception in 2003, more than 120,000 new dictionary/thesaurus have been gifted to Long Beach 3rd graders. For many of these students, this is the first book they are given. The program includes annual events at several libraries to teach children how to use their new dictionaries through fun games and activities. This is all possible thanks to the shared focus of supporting youth literacy of the two organizations that Margaret helps lead.

During her time with the Library Foundation, Margaret has realized the importance of nonprofit organizations. So much is accomplished thanks to those who donate their resources and time to causes that matter. 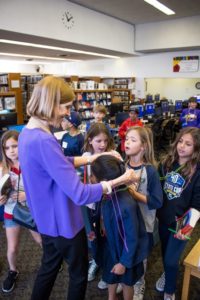