A Love of Literacy from Coast to Coast

When Susan Redfield was in high school she would use money she saved from baby-sitting to take the train to New York City. She would usually go to the theatre when she arrived, but would also visit the New York Public Library. It was there that she began discovering the treasures that could be found at public libraries and developed a love of literacy.

As a teen, Susan was a fan of Albert Hirschfeld, a cartoonist whose work was featured in Playbill, The New Yorker Magazine, New York Magazine, and other popular publications. While looking for Hirschfeld’s works in these publications at the New York Public Library, Susan discovered short stories by John Updike and J.D. Salinger. The Librarian invited her to the archives section of Library to find more stories and books she would like. Susan remembers feeling like she was meeting The Beatles as the Librarian guided her around.

In 1997, when she moved to Long Beach after working as a social worker and attorney in Chicago, Susan was looking to get involved in her new community. In Chicago, Susan had been involved in raising funds for children’s playgrounds, the zoo and her church, and was hoping to apply her experience in philanthropy to causes that were important to her in Long Beach.

One of the first friends she made when she arrived was Diane Jacobus who is one of the founders of the Long Beach Public Library Foundation and at that time was a Senior Advisor to Mayor Beverly O’Neill. The two of them started a book club together and Diane would tell Susan about the great work that the Library Foundation accomplished.

In 1999, Diane introduced Susan to Gene Richey, the Executive Director of the Library Foundation, who invited her to join the Endowment Committee, Chaired by Margaret Durnin. And in 2001, she began serving on the Long Beach Reads One Book committee where she met her friend Mary Barton. Long Beach Reads One Book brought different authors to the city every year for a series of events to inspire reading among residents of all ages. Meeting Ray Bradbury when he was the featured author in 2005 is one Susan’s favorite memories of this program.

In 2004, Gene Richey invited Susan to join the Board of Directors for the Library Foundation. She still has the letter of invitation and is amazed it has been so many years since that day.

In addition to continuing to help organize Long Beach Reads One Book for several more years, Susan was elected to the role of Vice President of Fund Development for two terms and is completing her term as President this year.

Susan’s dedication to the Library Foundation has helped the Foundation expand and support the Library in evolving to meet the changing needs of the city. Her love of literacy has been shared not only with those closest to her, but with the entire Long Beach community. 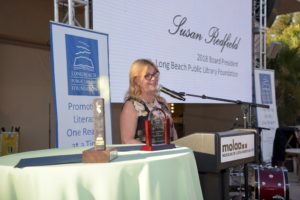 Susan Redfield speaking at the 2018 Grape Expectations fundraiser for the Library Foundation.