A Library and a Family

For many, a library is a home away from home where they can find a quiet and friendly place to study, research and read. For Lorrie Hutton, this goes one step further. When talking about how she joined the Long Beach Public Library Foundation Board of Directors, she talks about how much it was like joining a family.

“I had never seen that type of camaraderie before. That’s not to say we didn’t have our problems but it was truly like family.”

Family is very important to Lorrie. She grew up Oklahoma and Texas and her mother placed great importance on libraries, researching and looking up words in dictionaries. Lorrie remembers when the bookmobile would come around her neighborhood in Oklahoma and how fun it was to pick out her next read.

A job with American Honda Motor Company prompted a move from Texas to California about 30 years ago. Her first home was near the ocean in Redondo Beach which convinced her to stay and live close to the beach.

In 2005, Margaret asked her again to join the Library Foundation Board. This time Lorrie was looking for a way to branch out and meet other people in the community and she agreed.

Some of Lorrie’s favorite memories from serving on the Library Foundation Board are of the Booked event series. One of her favorite guests was Jeffrey Weaver, Curator of Sculpture & Decorative Arts at the Getty, who spoke about the book, Gods of Angkor: Bronzes from the National Museum of Cambodia by Louise Allison Cort and Paul Jett. Jeffrey was co-curator of the exhibition that was organized by the Getty, the Smithsonian and the National Museum of Cambodia.

In her 13 years on the Board, Lorrie was elected to the roles of President, Vice President, Secretary, and Vice President of Finance. She has helped guide the Library Foundation through exciting times like the fundraising campaigns for the Mark Twain Neighborhood Library and Michelle Obama Neighborhood Library, as well as challenging times like the campaign to keep Main Library open when the city considered shutting it down.

She looks forward to the opening of the new Main Library and treasures the memories that brought the Library Foundation to the success it is today. 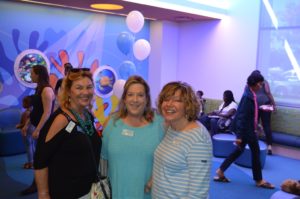 From left to right: Susan Redfield, Lorrie Hutton, and Margaret Durnin at the opening of the Michelle Obama Neighborhood Library in September 2016.