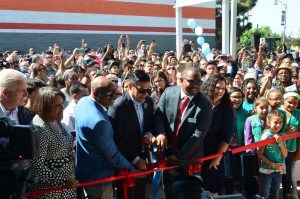 At Vice Mayor Rex Richardson’s State of the Ninth District on November 3, Kate Azar, our Executive Director, announced that the Foundation has raised over a million dollars for the Michelle Obama Neighborhood Library! These funds go toward’s the library’s special programs and services, like the Family Learning Center and the makerspace Studio, and have funded its dynamic Children’s StoryTime theater. You too are invited to join the Long Beach Public Library Foundation as a Founding Donor by contributing any amount–whether it be five dollars or $5000–to establish the Michelle Obama Neighborhood Library as a center of community growth and development in north Long Beach!.